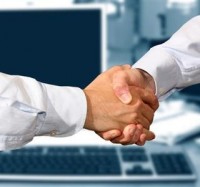 CEOs hired externally at Standard & Poor's 500 companies, for example, received a median total compensation package of roughly $12.2 million in 2007, or 51 percent more than CEOs with at least two years of tenure, who recorded a median pay of approximately $8 million, according to a study by Equilar, an executive compensation research firm based in Redwood Shores, Calif.

Internally promoted CEOs made less than both groups, earning a median pay package of roughly $6.9 million.

"This study highlights the costs of poor succession planning by boards and senior executives," said Alexander Cwirko-Godycki, a research manager at Equilar. "When companies don't have a solid pool of internal candidates, they often pay extra to new executives by offering signing bonuses, large initial equity grants and make-whole payments."

The study looked at nearly 1.300 large, medium and small companies and found pay disparities across the board.

Small companies were most likely to hire from the outside, and CEOs for those companies benefited from the largest premium in pay, the study noted, receiving a pay package that was almost 80 percent higher than the median package for tenured CEOs at the same company.

In each three segments, companies with lowest performing figures where most likely to hire outside CEOs, the study concluded.