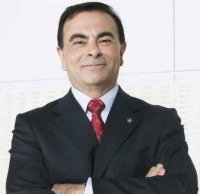 Carlos Ghosn was born to Lebanese parents in 1954, in Porto Velho, a remote city of the Amazon basin in Brazil. He moved to Beirut with his mother when he was 6. Under Lebanon's French protectorate, he completed his secondary school studies at a Jesuit school in Beirut. He then entered the elitist French Ecole Polytechnique in 1974 from which he graduated in engineering with a specialization at the Ecole des Mines in Paris in 1978. Ghosn has French citizenship.

He started his working career with French tire company Michelin, becoming plant manager in 1981 at the firm's Le Puy location. Subsequently, Ghosn expanded the Michelin's research and development branched between 1984 and 1985. On top of being fluent in six languages, his knowledge of the Latin American market led Michelin to name him Chief Operating Officer in Latin America, then Chairman and CEO of Michelin North America.

After his success with Michelin, Ghosn joined French automaker Renault in 1996 as executive vice president, where he was put in charge of supervising Renault activities in Mercosur (Southern American trade block).

From 1999 on, Ghosn managed the progressive involvement of Renault in Nissan Motors, which was undergoing financial turbulence at the turn of the century. In 2001 he was crowned Nissan's C.E.O. A year after his arrival, Nissan climbed from a $6.1 billion loss to a $2.7 billion net profit. Today, Nissan is one of the most profitable car manufacturing companies in the world with a net margin above 7.5 percent.

In 2005, Ghosn became C.E.O. of Renault, replacing Louis Schweitzer, and he was recently been approached by a few General Motors shareholders to become GM's new CEO. But talks broke off without any commitment from either side.